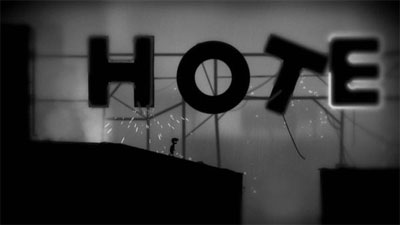 You can check in, but you'll never leave?

Limbo.  The state between existence and non-existence.  The mystery behind Limbo’s story is equally as fascinating as the game in its entirety.  Playdead development accomplished much with the release of Limbo by giving us a game with a minimalist story, an original look, and mind-bending puzzles.  Limbo was voted the best indie title on PSN for 2011, so does the game rise above other titles, or does Limbo introduce players to purgatory?

Limbo pulls off an entire story with no dialogue and one word: HOTEL.  What is this hotel?  Who owns it?  Is it an homage to Hotel California?  Who knows.  The best literature is ambiguous, and Limbo’s storyline can be interpreted many ways.  As the game begins, the player–a young boy with a sever END_OF_DOCUMENT_TOKEN_TO_BE_REPLACED

BurgerTime World Tour offers an authentic arcade remake in every sense of the word. A remixed version of the old intro song greets players at the title screen, and nearly every element from the 1982 arcade classic is brought back to life for the modern gamer. Peter Pepper and his old enemies of pabulum bring the scent of nostalgia to your nostrils as well as anybody could possibly hope for, but it still leaves that bittersweet arcade game taste in your mouth at the end of the day.

In the simpler gaming era of the 80s and 90s, it was perfectly valid for a game to be void of any storyline at all. Peter Pepper (who shows up in cutscenes even if you decide to play with your avatar) was a chef, whose specialty happened to be oversize hamburgers. He walked over each ingredient in order to make it fall down columns in order to complete the finished sandwich. Perfectly regular human behavior. Nowadays, though, you need motivation. Why does Chef Pepper have a feud with these irascible veggies? Evidently, we need to know the answer to that, as demonstrated through painful cutscenes and just plain silly interactions between characters. Silly is the keyword, though, as the slapstick and general dimwitted fun present throughout would certainly be enjoyable for a younger audience.

The graphical updates are on par with the retro feel that the title clings to, which isn’t necessarily a bad thing. The entire style of the game is based around that classic arcade feel; the music lends a hand here as well, chiming the player along as they jump and climb past pickles and peppers to plop patties past a plethora of …obstacles. Additionally, the gameplay itself feels reminiscent of a classic quarter-play title. There is a legitimate challenge to be had in World Tour, and a lot of it can be attributed to intelligent level design and enemy AI. A five-star rating is equate to a near-perfect run, which adds plenty of re-playability to those looking to top the Xbox Live leaderboards (sidenote: absent is the ability to view the leaderboards directly after completing a level).

As much as this remake succeeds, it still seems better suited for a joystick rig. A slight delay in movement resulting from the use of a thumbstick on a standard Xbox controller can create a microscopic delay often resulting in critical errors in a game of this style. The jump button is occasionally less-than-ideal with its response time, frequently leading to similar issues. Invisible walls and texture glitches often block inconspicuous areas of various levels. Boss battles feel tautological, and seemingly add nothing outside of a justification of their inclusion in the storyline. Despite these flaws, though, the gameplay remains strong as its core.

Overall, BurgerTime World Tour offers a refreshing look at a classic arcade title. Fans of the first game will find an entertaining, family-friendly experience for a reasonable price on the Xbox Live Arcade, while newcomers may be able to overlook some minor issues in order to lose themselves to a simpler time, when games could be fun in spite of themselves.

The War of the Worlds Review

WAR OF THE WORLDS (More) Media


Still no release date for War of the Worlds, but I thought you might enjoy some new screen shots and a new trailer coming to PlayStation Network and Xbox Live Arcade.

I’m still concerned about the gameplay. After watching Trailer 2 and the one above, I don’t know how far great source material and Patrick Stewart can take this game.

As stated before, I love the art style and idea, but if the gameplay feels as clunky as it looks, this is a $15 frustration in the making.

WAR OF THE WORLDS Media

HG Wells’ masterpiece The War of the Worlds is best remembered as a radio drama, and if you’re too young to know what that is, it’s like a television without the picture.

Other Ocean’s The War of the Worlds will probably not be remembered. But it may not deserve its fate, as can be seen in its newest gameplay video and screen shots.

I hope to get a review copy soon and will be able to post a video explaining the game in greater detail, but I have formulated a visual opinion.

The graphics are beautiful, but there are some lighting choices that are a bit distracting. The characters look a little stiff, but they are still believable in their world. The style and design are going to be this title’s second-best selling point.

Its first selling point will be the source material, to which justice has been given. The alien ships look retro and beautiful, and the setting fits the time period.

Controls will hinder the game. One look at the video shows that this will be a frustrating game to play. However, clunky controls are not always a problem. Ico is one of the most beautiful games of the PS2, and it is a beast to control.

I appreciate side-scrolling platformers, since I’m getting old in the gaming world. Once upon a time, all but RPGs were left-to-right platformers, and Other Ocean has added plenty of depth here to make it feel like a 3D platformer.

No official release date has been listed.